In 1965, four Ann Arbor churches envisioned a gathering place for students – a coffee house like many that were springing up on campuses all around the country.

The focus of the churches was not to preach or proselytize, but to listen to the concerns of students and to provide a warm, safe, peaceful place to come together free from drugs, alcohol, and the storms of academic life and personal stress. It was meant to provide a creative outlet for talent in music, poetry and artwork. By December 1965, it had received its present name: The Ark. It has been afloat ever since! 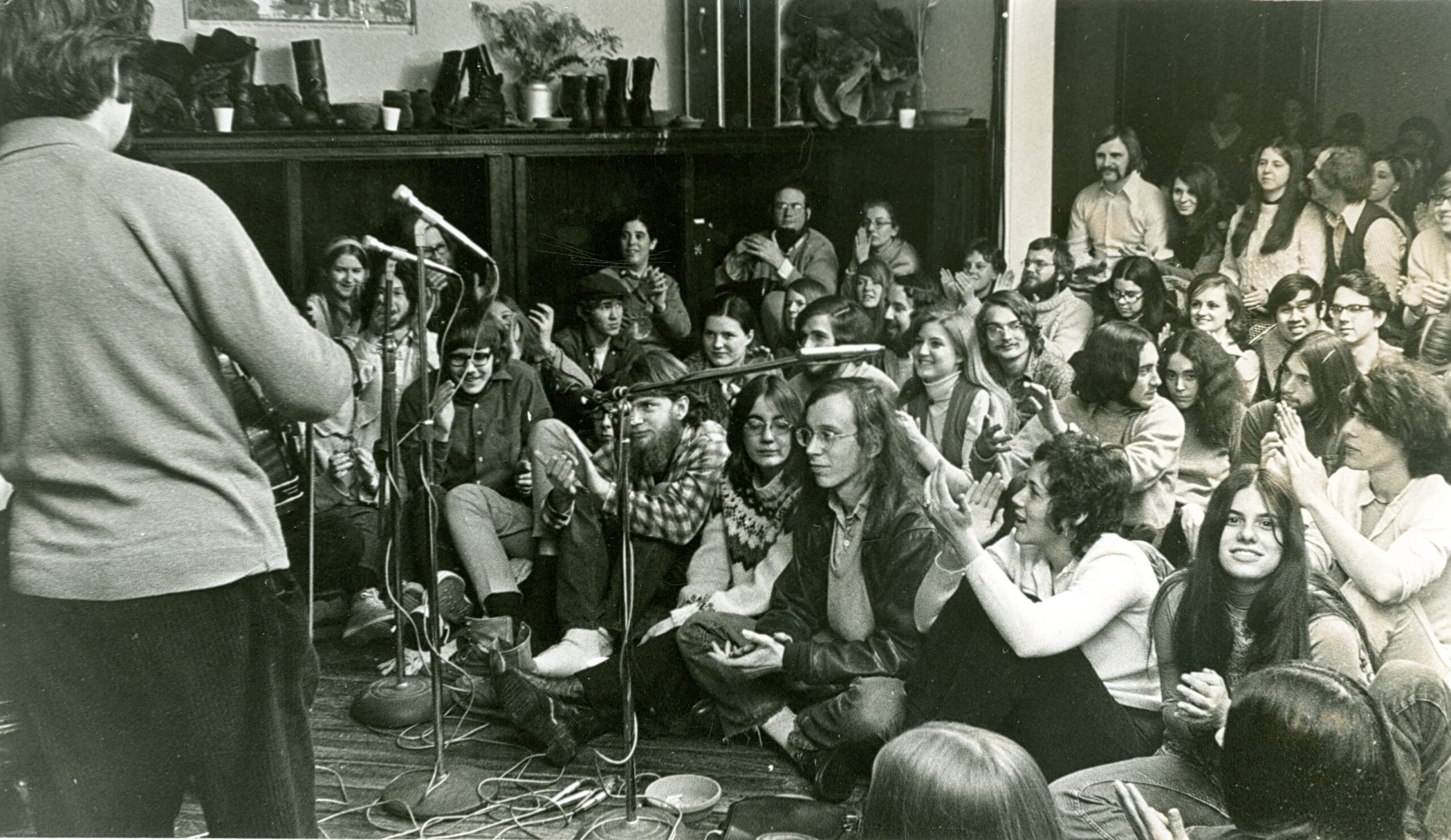 George Abbott White, the first manager, began in January 1966. The early programs included presentations by and dialogue with faculty and other local folks. The political climate of the 1960s provided the opportunity for many political as well as ethical and theological discussions. Gradually The Ark became a space for students to hang out and talk informally. Folk music soon became part of the offerings. The Wednesday evening Hootenanny (now known as the Open Stage) was started by Bob White, who still occasionally performs at The Ark, and Friday and Saturday nights’ planned programs drew crowds. For a while worship services were held on Sunday nights. Shape note singing began and still continues to this day. Free coffee, tea, sandwiches and pastries were served between sets by “douloi” (the biblical term for “servants”) from the various churches. Soon an Ark community developed and “The Ark volunteers” took over the serving, which they still do today.

In January 1969, David Siglin was selected as manager. He said he would do the job for five years – tops. He retired from The Ark in 2008, having made it one of the most well-known and respected music venues in the country. That The Ark has survived since the 1960s is a miracle in itself, due in no small part to the vision, dedication, and energy of Dave, with significant support and encouragement from Linda, his wife.

It seems that the first paid performer was Larry Henkel, and several now-famous people got their start at The Ark in the late 60’s. The Prime Movers, a rather raucous group, played at The Ark with drummer James Osterberg – now known as Iggy Pop. Will Geer, later known as Grandpa Walton, performed the first “Tribute to Woody Guthrie” in the U.S. at The Ark. Gilda Radner, of Saturday Night Live fame, performed in the hoots as a student.

The financial support from the four churches gradually dried up, and The Ark had to support itself with monies from admission fees and donations. The Ark initiated a major fundraiser in 1976, the now yearly Ann Arbor Folk Festival. In the late 1970s The Ark was reorganized as a 501(c)(3) nonprofit organization. By the early 1980s First Presbyterian Church wanted the Hill Street property for its own use and The Ark ended it first phase of its existence.

The second incarnation of The Ark was at 637½ S. Main St. above the original South Main Market. Ark II opened on September 8, 1984, featuring performer Michael Cooney. The Ark continued to grow, and on September 12, 1996, Ark III opened at its current location at 316 S. Main with a program featuring Greg Brown, the Chenille Sisters, Maura O’Connell, and comic/songwriter Andy Breckman, creator of the popular TV show Monk.

The location at 316 S. Main became The Ark’s permanent home on December 28, 2012 when we purchased our venue as a condominium.  For the first time in our history, The Ark owns its home! The Ark continues to set its roots deeper, bringing music to the community and contributing to the vibrancy and economic success of downtown Ann Arbor for years to come.

In all three incarnations, The Ark has remained true to its purpose, now embodied in its mission statement:

The Ark is a nonprofit organization dedicated to the enrichment of the human spirit through the presentation, preservation and encouragement of folk, roots and ethnic music and related arts. The Ark provides a safe and welcoming atmosphere for all people to listen to, learn about, perform, and share music.

The Ark is governed by an elected volunteer Board of Directors, run by a staff of eight full-time and five part-time employees and supported by more than 400 volunteers. The Board is elected by the organization’s Charter Members – a group that includes some of The Ark’s founding members, current and former Board members and other “keepers of the flame” dedicated to ensuring that The Ark continues to fulfill its mission far into the future.

Fifty years ago, no one could have imagined that those early beginnings as a campus ministry coffee house would develop into a world renowned folk, ethnic and alternative music club. Indeed, the reality of The Ark today has far surpassed the wildest dreams of the original founders.