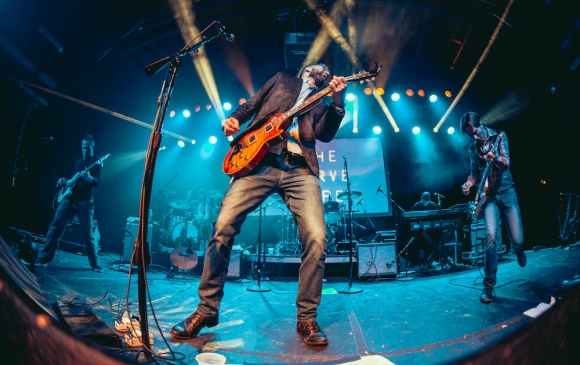 The Verve Pipe has spent the better part of three decades in evolution, creating a sound that transcends genre and generation.

It’s a sound rooted in pop hooks, alt-rock guitars, and the sharp songwriting of frontman Brian Vander Ark. A sound that’s taken the band from the golden days of late-’90s modern rock — when The Verve Pipe enjoyed multi-platinum success with hits like “Photograph” and the chart-topping “The Freshmen” — to the rule-breaking creativity of the 2010s and beyond, an era that’s found the band reinventing itself with each release. Throughout it all, The Verve Pipe has released critically-acclaimed music as both a major-label act and an independent band, maintaining a commitment to forward-thinking rock & roll with albums like 2021’s Threads.

Co-written by Vander Ark and backup vocalist Channing Lee, Threads marks a collaborative peak for The Verve Pipe. It’s an album about the trials and triumphs we all face — love, loss, abuse, addiction, romance, anger — laced with orchestral strings and The Verve Pipe’s lifelong willingness to stretch its legs. Atmospheric one minute and anthemic the next, Threads is the sound of a band that remains at the peak of its powers, turning the everyday experiences of modern existence into songs that are celebratory and cathartic.

The Verve Pipe has had a reputation for great, fan-friendly live shows from the start, and now they’re back, up close and personal at The Ark.